skip to main | skip to sidebar

Who is Tabitha Ministries? - As seen by Rebecca 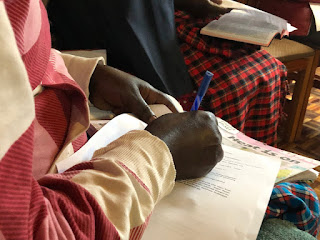 “What is Tabitha Ministries right now?” That is the question I wanted to answer when I came to visit my parents in Kenya. I came to realize after spending time with them that the real question is “Who is Tabitha right now?” Tabitha began as a Bible study led by my mom, acting as God’s hands to serve and mouth to speak into local women. As time went on, Tabitha became groups of women overseen by my mom and her partner Peris as they sought to learn the truths of God as explained by the Bible studies she had written. Now, however, I have truly seen that my mom’s passion for women to be able to study the Bible for themselves has begun to be realized. I have seen a different side of the ministry that has emerged. I realize that the most recent blog my mom wrote was about this, and shows even more pictures, but I wanted to share my own experience of it. 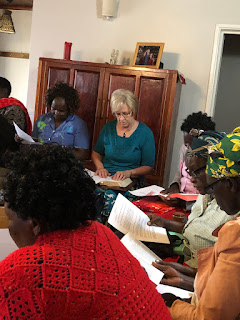 The second week of my visit to Kenya, I had the privilege of attending a monthly center leaders meeting, one of the only parts of Tabitha that still takes place in our house. This is because the leaders have taken hands on ownership of so much. 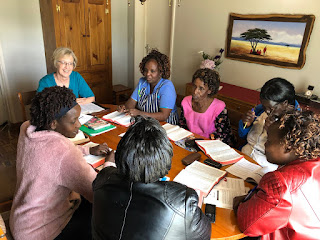 The morning was spent with the top leadership team who shared how their personal devotions had impacted their lives. This recent focus, trained women to study the Bible personally, outside of Tabitha bible studies. This leadership team of six women visit locations where groups want to start new Bible studies, among many other hands on leadership activities and decisions. They talked about all the places they would visit in the next month to encourage and strengthen the work of local leaders. 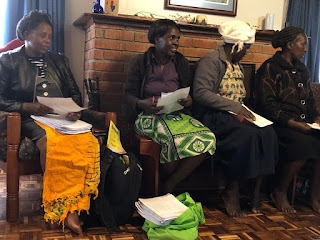 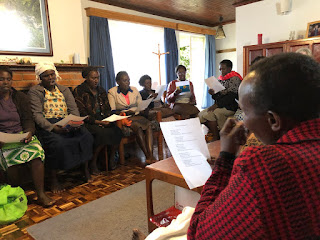 The third week, as Mom was busy with other missionary station duties, Tabitha mostly ran itself, though she still worked on studies, and Peris still worked on translating. It no longer depends daily on the work of the mzungu, the white missionary. It is God’s ministry, and the local Kenyans are a growing multitude of people who allow themselves to be God’s hands and feet. So “Who is Tabitha right now?” Tabitha is a group of local Kenyan women who serve their communities.
Posted by Rebecca Spriegel at 12:53 PM

1. Thank God for His people continuing to reach out to the needy during these uncertain days. Pray that God's people would stand firm and be a light to those who do not know Jesus.
2. Pray for God to accomplish His purposes in the corona pandemic, refining us His people to love and trust Him more fully.
3. Pray for an end to the corona virus all over the world. God is able!
3. Pray for many Kenyans who live day to day, dependent on their farms or small buisnesses. Pray that God would provide for them in ways that they would clearly see His hand of mercy and grace.